The last week has been a bit of a write off – literally.  I have upset a well known psychologist and had to defend a statistic in my second article – you’ll gather that the paper won given the correction at the bottom.  I didn’t reference correctly, a  dreadful crime in newspapers and a bloody big lesson learnt for me (especially since I am a keen and conscientious researcher, stupid stupid).  The psychologist bit irks me a bit more; just because she is a ‘someone’ is it right that my words – which were a direct quote actually – are pulled?  The words removed, ‘it doesn’t really matter how children eat their meals, it’s what they eat that counts most’ added strength to my article as I went on to disagree with her.  I expressed my opinion, so sue me.  Perhaps I used the wrong forum, perhaps I should stick to ‘fluffy’ articles and make life easy for myself.  I don’t think the answer is to become a hard-nosed journo taking on the world, my skin is most definitely not thick enough for that.

Having a long weekend last weekend meant we drank SO MUCH MORE than we have been recently.  Three days in a row and there is no doubt that it saps my energy.  This means meal plans aren’t done (not toasted sandwiches again), washing is left longer (I am thinking of trialling a new system actually where I wash and then chuck into buckets each boys’ clothes which they can then rifle through at leisure when clean items are required.  It would save a lot of ‘Mum, I’ve got no pants!’ when actually they have and I have just been beaten, again, at bedtime by that huge pile of laundry to sort and fold.)  Sorry, so mind-numbingly boring but so relevant and unfortunately so me.  I blame it on never having been a corporate high-flyer (or even low-hoverer), as I have heard that treating your home as you might a bunch of recalcitrant juniors is a successful technique for imposing domestic harmony.

So, with my small hiccup in newspaper-land and my many hiccups after more wine than was frankly necessary I am going to take this entire week for mental health.  I am going to pitch again and keep my fingers crossed that I haven’t tarnished my rep for ever and in the meantime whip into shape all the unruly socks in the house.

Over the long weekend

I cooked beautiful cauliflower soup – which darling Sam declared to be “the best soup I’ve ever eaten!”  Gorgeous boy, always knows how to cheer me up! 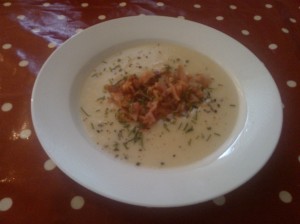 The best soup Sam has ever tasted apparently!

We made pancakes which was a bit tense to begin with as I couldn’t cook them fast enough to keep up with demand and the whines of “Where’s mine?” were being laid on thicker than the batter.  I caught up though and we had wonderful fun tossing one poor pancake till it was cracked and split like the sole of an ancient old shoe.

The pancake while still whole.

I read surprisingly little of the three fat newspapers I bought, but I did weep at Will Swanton’s wonderful account of a young surfer.  An amazing story perfectly told.  Surfing. Another thing to worry about.

We tried to take in Vivid Sydney on Sunday with our lovely friends Morgan and Hannah.  It looked amazing the little we saw.  Our poor children though, being short couldn’t see much for the hoards of people.  We wildly wrote our phone numbers all over their arms so scared were we that they were going to get tugged away by the flow of the crowd.  They were amazing though and so uncomplaining.  They loved the sparkly tunnel called ‘Hundreds and Thousands’ and clapped like mad in order to elicit a response from the bright pink foxgloves.  No-one was prepared for the crowds, next year we have said we’ll do it better and manage that glass of wine we had been anticipating.  Thank goodness we were each with close friends though, it definitely helped us all cope.  I can’t wait for next year!

The boys inside ‘Hundreds and thousands.’

Almost at the end of the week and despite all of my good intentions I have to admit to being really rather keen on a small (ish) glass (or two).  I’m sure I can find justification if I try hard enough!