The cake! Dave the Minion with balloons.

I hope that you, unlike my husband, read the title correctly.  When shared it with him, he chuckled and thought it must be composed of one long moan having automatically inserted a ‘do’ in between ‘why’ and ‘we’.  But not so.  I am, in fact, saying hurrah for the children’s party.  For all the work and stress (and not even thinking about the utter annihilation of the house), the excitement and joy that those two hours bring are worth it all in my book.

Last weekend we threw Edward his first proper party for his fourth birthday.  I think up until pre-school the party is more about the parents congratulating themselves on surviving this far isn’t it?  He had his heart set on a minion theme.  It is amazing how many people are unfamiliar with minions, compared to those to us for whom Dave, Tim, Larry, Evil purple et al are like common acquaintances.  Just another minor divide between parents and those who live in the real world and whose acquaintances are not made out of plasticine (mostly). 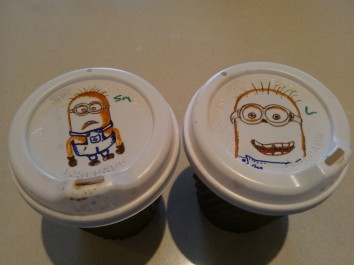 Even the Source got into the minion swing of things, thanks BJ!

One lovely thing about this party was how excited and involved the big brothers were.  I had literally nothing to do with the invitation; it was designed, printed and written out by William whose PowerPoint skills (honed through weekly presentations on such things as the life cycle of grasshoppers, rugby union and Hereford Cattle – thanks for the help Uncle Robert) already put mine to shame.  It was vital, according to the eight year old to put together a brilliant playlist (What?  To make sure ‘pass the parcel’ goes with a bang?  Liven up musical statues?), resulting in one of the most fun party planning sessions we held (the catering meeting was less amicable once I said no to Happy Meals – with Coke – followed by bubble gum).  I am pleased to say the soundtrack included some songs I actually liked – in between Bruno Mars and Alvin and the Chipmunks singing Party Rock.  Much as the footage of the boys dancing (I feared for life and limb while filming this) to this song will amuse me forever I never thought I would see the day when my music collection would include the soundtrack to ‘Chipwrecked.’

The morning of the party saw William and me answering the door at 7.15am in my pyjamas to the man with the bouncy castle which prompted an outburst from William ‘But his van’s so small.’ (Sorry William)

The extra time on the castle, we had assumed would allow us peace from small people in order to fling everything into our bedroom to impose a phony tidiness on the house (I always worry for people whose bedroom doors are open to the public).  What eventuated was the cancellation of the party roughly 27 times in two hours – once when we patently knew people would be turning into our street.

Anyway, the party was a great success and Edward had an absolute ball with lots of his friends, and lots of our friends all being there for him.  I don’t mean that to sound as though he enjoyed being the centre of attention for the sake of it (but he did!), more that it meant so much to us all to have our house full of the happiness and laughter of people we love.  That is why I say hurrah for the birthday party.  It can encompass all that is well and good and working in a child’s life.  Friends are being made, relationships apart from the family forged and the coming together of this at a party is beautiful to see.  Childhood relationships, based on playing in a mutually fun and engaging way which is, in turn, being nurtured by the establishment responsible for the child while he or she is away from the family are so crucially important I think for a child’s sense of well-being.

In another layer during the party, the child sees the relationships between his siblings and their friends and his parents and their friends.  This gives him confidence to establish bonds that he believes and invests in, knowing many will have long-term value.

Living life as an expat family is full of ups and downs.  There is the constant push and pull of here and there.  I have written before about my thoughts on ‘home’ which I suppose at the very lease means I had a happy childhood.  I can certainly remember many parties; birthdays spent doing treasure hunts and pram races on the front lawn, Easter celebrations amid the daffodils, ‘pit’ parties in Roxburgh, Halloween parties in Sprouston (where older brothers and sisters wreaked their revenge for smaller ones annoyances throughout the year), the village bonfire, the Christmas Eve drinks where Robert and I would revel in being ‘looked after’ by the teenagers (probably a ruse by the parents to stop the older ones sneaking a few Archers and lemonade!).  All of these happened in a close and comforting circle of which our family was a part.

It suddenly struck me last weekend (you’d think I might have got here sooner I know), that it is our turn now to create the same for our children.  The first names on Edward’s list (at the inaugural minion party meeting) were those of the gorgeous family friends we have made, as though no party would be complete without them first and foremost.  Coupled with his closest friends from school, we were a very happy band with a very excited, very lucky boy in our midst.