Pretty much everyone who is getting sober or overcoming an addiction will talk of the battle waged over the long term before there is any sign of peace, of even a glimmer of success. Much like the Leunig cartoon, there are ups and downs as the journey progresses, such as in life.

Imagine though the lows gradually deepening, the highs becoming less frequent and you have a picture of a descent into problematic, dispirited living. Combine this with everyday stresses and pressures nice brew for dependency on one or other of the many legal, acceptable substances conveniently awash in our society. Support for chemical support is constant, unwavering.

We have all known the day from hell when wine o’ clock cannot arrive fast enough; the weekend when it’s never too early; the party where it’s never enough. This is the normal face of booze, and it is, it can be, fun. Unless you are one of the unlucky ones who like it just a little sooner, a little more.

The day comes, whether with a loudspeaker, billboard and fireworks, or simply with a shrug and a sigh, when the drawing of the line is no longer optional. This is the day where the presence – or not – of support will make the difference between stumbling and soaring.

Embarrassingly, I can think of at least two occasions in the past where I have proclaimed, even written down, “This is the first day of the rest of my life.” Thank god, the audience began and ended with myself (until now). I have shameful memories going back decades, times when I knew that for some reason, I was unable to join in like normal people. Oh how I wasted time longing to be one of them.

The difference this time is in the planning. Not the kind researched from books though, plotted methodically on a to-do list. Rather the organic, authentic, learn-the-hard-way kind. In between the extremes, and sometimes during them, I have gradually amassed a collection of resources I can tap into depending on mood or need.

I will share these soon in a new section on the blog in case the things that work for me might work for others. That however is the nub: what helps me will not help everyone. It is crucial to remember that it is a journey, a process and each is as uniquely different as we are.

There are, frequently, still times where the only choice feels like opting out; climbing into bed on a mockingly sunny day and sleeping until the hard feelings pass. I am incredibly grateful to have a reason, three actually, who make this impossible. (They should have been a reason against dependency too, sadly it doesn’t work like that…)

Those days, conversation remains at a high level, the smile plastered on while I interact in shops, welcoming chores, revelling in the basic requirements of living. The need for food, for clean clothes, for bags packed and unpacked, somehow satisfies the huge part of me that needs to be needed. I have achieved, by simple means I have kept going. There need be no depth, no soul baring, no breaking down. On those days I fake it till I look like I’m making it and remind myself it is only one day. That is enough. I am enough. 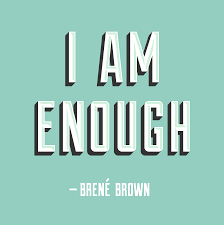