There have been countless occasions and times I’ve wished I’ve been back in Scotland but oh my, I wish I was there now.  What a responsibility everyone (16+) has got. From the rhetoric reported here and from what I’ve read it has become so terribly divisive I worry for Scotland on Friday whatever the outcome.  Surely the weight of the ‘No’ vote has hit home though?  The threat to the healthcare system, taxes, Scotland’s ability to defend itself, the threat of the loss of the pound….I admit I have always been a ‘No’ supporter but I am also a passionately patriotic Scot and if it made any sense whatsoever then I would be more appreciative of the romance.

On my wall throughout my school years was a page torn from my Scottish Rugby Magazine (subscription an annual Christmas present, thanks Dad!).  It was an advert for Famous Grouse that read ‘I Support two teams: Scotland, and whoever’s playing England.’  Funny though this may be in sport – there are those who argue it’s no laughing matter – in reality the common bond we have shared for 31 decades is too important, too dynamic as the UK, too iconic to give up on it.  Alex Salmond and his henchmen may as well have played repeats of Braveheart on a big screen in George Square and Princes Street Gardens for all the depth of their argument. Had Mel Gibson not been otherwise tied up you can be sure the SNP would have paid them half their budget to parade about in his tweed and blue get-up.

Passion. Honour. Pride. Patriotism. We all feel this already do we not?  How would this increase by seeing our wee country struggle as it gets trampled by its European neighbours, among whom it will be a laughing stock (let alone on a world stage).

Let’s stick together Scotland, accept the help from whence it comes, give thanks for what we’ve got and move forward in unity.

Lang may yer lum reek, whatever your vote, wherever you are. 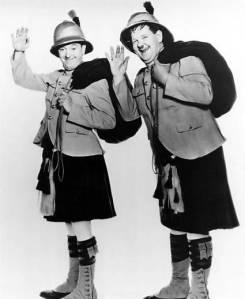