You assume you will remember every moment because it just seems impossible that you won’t. Each night when you watch them sleeping it feels as though you have never seen anything more perfect, marvelling again at their nails, eyelashes, breaths. This doesn’t seem to diminish; I am as incredulous when I look at my nine year old sleeping as I was when he was a newborn.

Knowing that one day it will be unseemly and probably inappropriate to stand and stare at them as they sleep I wonder if I should take some pictures. There is no hesitation after all when they are babies; they are snapped in our every idea of a compromising position – legs akimbo in the bathtub, messily slurping spaghetti, wearing a fetching cardboard box as a hat- you name the activity I’ll bet it’s been set down in digital history.

This morning I looked at my littlest lying top to tail with my husband and mourned the fact that one day he would be as big, as hairy, as manly as his dad.

Going by the fact that my love is as strong as it ever was I suppose it is safe to assume it will always be so. So perhaps it is grieving the lessening dependence on me. The way my suggestions of outfit, news topic or game are rebuffed, rebuked even.

My nine year old now casually comes up sideways on and leans into me, his body language belying his coolness. It is all he allows himself, but it is something. My middle one enjoys the game we play at school drop off when I try to catch him for a kiss and he skips out of reach. I have learnt to enjoy the game itself though for it’s own intimate joke between us. He though appears every night in our bed, climbing in so stealthily that we fail to wake, until he belts one of us in the tummy with his starfish ways.

Sam de Brito, whose column was a highlight of my weekend, wrote last weekend on co-sleeping (http://www.smh.com.au/national/sam-de-brito-my-baby-in-bed-20151006-gk261i). Though sleep quality would no doubt improve and cricked necks would be fewer, it will pain me beyond belief when my boys truly grow out of coming to snuggle in our bed. To echo a fantastic journalist lost too soon, especially for his little girl, I find the semi-wakeful cuddle is when I feel more a mother, “more human, than any other time in my day.” Cherish these precious times, live fully in the present, live well. RIP Sam de Brito. 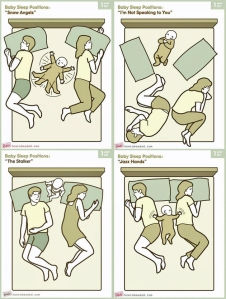