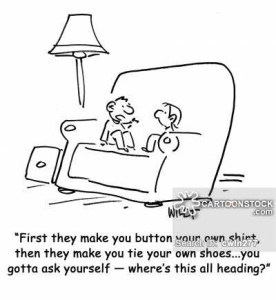 Like many mums, the apron strings between myself and my kids have always been tightly bound and double knotted. They are growing up far too fast and every day I wish I could stop time, preserve them as my – mostly – delightful little boys. My eldest would definitely take umbrage at being called little but in my eyes he and his brothers will always display that kernel of babyhood, however tall and hairy they become. For years they are our shadows, having no choice but to be wherever we are, in the trolly while we shop, playing in the corner of the doctor’s room on the rare occasion we’re there for ourselves, in the creche at the gym while we claw back some ‘me’ time, even squashed into the cubicle of a public loo.

Of course we know from the moment they are born that the day will come when their reliance on us will be at an end, the hope being that our efforts are rewarded with the emergence of a thoughtful, articulate, well rounded and capable individual. Knowing this makes the stark truth no less horrifying: ultimately I will no longer be needed. So I have decided to put myself into training. Independence will not be an overnight severing of the apron strings, more of a gradual fraying as the boys slowly start forging their own path in a organic way.

I have always been guilty of doing things for them that they should probably be doing themselves since doing it myself is quicker and easier. Uniforms are put out the night before, I make their lunches, pack their bags. I’m sure it would teach them all sorts of life lessons were I to ask them to do these and many other pesky tasks of daily living but I know my stress levels would go through the roof. They are so easily distracted that it’s a battle just persuading them to put the damn clothes on most of the time.  With a little planning I am changing things up. Before they go to bed their uniform has to be looked out, before the tv goes on in the afternoon their bag must be unpacked. I deliver a pile of clothes to their room and ask them to put it away. Baby steps.

I used to walk them to school, delivering them to the gate with reminders and hugs. When I went back to work last year I began sometimes only taking them halfway, peeling off towards the bus stop. They were, of course absolutely fine. They stayed together, adhered to road rules, my eldest making sure the younger two stayed safe. It turned out he relished the responsibility and it wasn’t long before he suggested they could go all the way by themselves. The first time I followed them. Yup, I felt utterly foolish but somehow compelled to shadow them back as they had me for so long. These days none of us thinks twice about it and they are always raring to get to school for half an hour of playtime.  The only stipulation is that they have to give me a hug first, something my twelve year old is unsurprisingly much more comfortable doing away from his mates –  wins all round.

The boys recently upped the ante when they suggested they could go and buy the milk we needed to save me a trip. That they also took their own money and added chocolate to their shopping made the experience all the sweeter! I came home from work one day to find they had decided to bake their own afternoon tea (my husband was working at home). Muffins and pancakes had been made and half the fruit in the house cut up. Hot ovens, open flames and knives, OMG what was my husband thinking? However there were no burns or cuts, just three very self-satisfied boys and a kitchen on which a flour bomb had dropped.

With my eldest moving from primary to high school next year there is no doubt the time is absolutely right for him to be emerging from beneath my wings, his brothers following in his wake. The knots are still holding for now, just fraying ever so slowly. And at the end of the day they all still ask to be tucked in and once they’re asleep are still my delightful little boys. 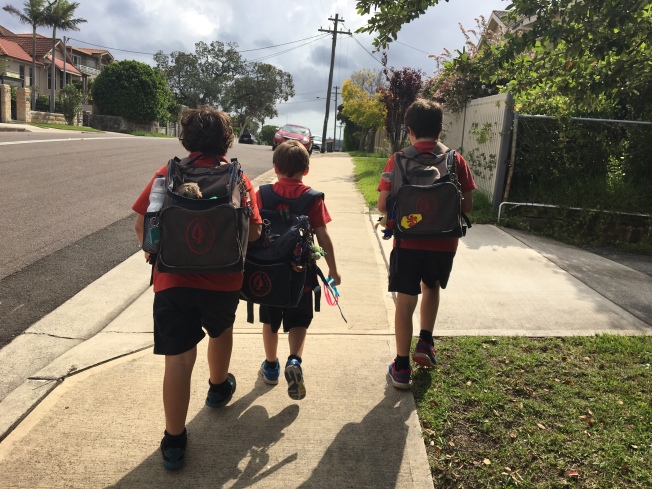