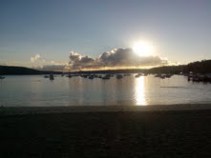 Not a bad place to train.

Australia has a reputation as the ultimate sporting nation and there is no doubt that sport here is very much more visable than anywhere else I’ve been (on account of the climate no doubt which I’m not going to mention much at the risk of alienating readers in cooler climes.)  There is a real ‘gymkit culture’, that is that sports clothing is not confined to the pitch, court or gym but is absolutely acceptable day wear.  (This could very well be the same everywhere and something I have just never noticed since I have traditionally existed at the other end of the active spectrum and the other end of the day.)  I have embraced this and not only because it means elasticated waists are de rigueur.  There are other reasons I just can’t think of them right now, oh my god, if anything is ever to make you feel old it is the submission to comfort over style.  Was it really me that was given lectures about being cold at a party or uncomfy on a plane, why did I not listen to my mum?

There is no doubt it is great for children though and the options are all there, from surfing to rockclimbing via tennis and paddle-boarding.  After dropping off Sam yesterday at a holiday sports camp William suddenly requested tennis lessons which I have to admit I wouldn’t be averse to, I really rather like the idea of being a tennis mum, at least you’d get to sit down and watch in mostly decent weather rather than standing at the side of a muddy pitch in freezing weather watching your precious baby get bashed about.  I’m all for the boys having exposure to as many sports as possible (still unsure though about Andrew’s suggestion of gymnastics for William after a display of his upper body strength in a door frame) so that they can find something they really enjoy (not worrying about the fame and riches, yet).  Tennis racquets for everyone’s birthday then.

I have been trying to remember any noteworthy sporting moments in my life and can only think of a few.

All in all, not a spectacular sporting resume but I have had some laughs (along with some chaps – that’s on the legs in cold weather just to clarify – and a drenching or two).  I hope my boys try lots of sports, enjoy some and if they excel I’ll see you at Murrayfield or in SW19!

Longest run without stopping 7.55mins – aiming to improve this today

Weight – 64.9 (very disappointing, may be compensating for the lack of wine with nuts and things, hmm)

This weeks I’ve been

Reading my Red and Country Living mags, my monthly indulgence, my heart is still in the country!

Listening to Flower of Scotland (school holiday homework as set by me) and Abba gold as we play yet another round of musical statues (the prize is one Jelly Baby).

Cooking with William, sausage and mustard rolls (see pic. I know, I’ll never get a job as a food stylist!) which he chose to cook out of the Junior Masterchef cookery book – they were delicious and will be a party food staple in our house from now on. 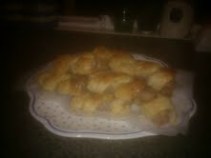 One day of practice is like one day of clean living. It doesn’t do you any good.” Abe Lemons A month on the other hand…

Dealing in debt, and stealing in the name of the Lord